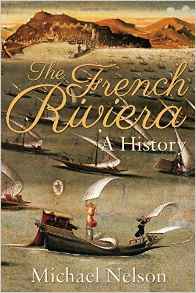 Michael Nelson’s new oeuvre is cunningly titled: The French Riviera: A History. Not: The History, which is just as well because he describes events from Pre-history to the present day and all in fewer than a hundred pages.

It’s not a peaceful story. The place from Marseilles eastwards to Cannes, Nice and Menton, the pleasure ground nowadays of millions of sun-seekers, seems to have been invaded by pretty well every power you can think of. Many of these have left traces of their influence from the Greeks, the Romans and the Phoenicians to the British, the Americans and Russians.

It has attracted all kinds from Crowned Heads to pirates and Saracens. If the British were first to see the delights of sunshine and this stretch of the Mediterranean coast as a refuge from the dismal offerings of winter and Spring in Northern Europe, it was the Americans who made it a summer haven, first for the rich and glamorous and then for the less privileged hordes who make their way there these days.

While he keeps a firm grip on the wordage, Nelson gives us intriguing glimpses of some of the personalities passing this way. He mentions the Frankish tax collector of Roman descent who so infuriated the mob that they locked him into a church and stoned him to death. Nelson tells us that he was reported to have broken wind in public places without consideration for others although that was not the reason for the stoning.

Thomas Jefferson visited Nice in 1787 when he was Minister of the fledgling American republic in Paris. Nelson emphasises how difficult of access the place was then. The roads were bad or non-existent; sea travel dangerous because of marauding pirates. It took sixteen days of continuous and uncomfortable travel to get from London to Nice. Napoleon Bonaparte improved things a bit in his time and passed this way on his way back from exile in Elba and en route to Waterloo.

It was the coming of the railway that really opened it all up. Queen Victoria visited the Riviera nine times between 1882 and 1899 usually travelling by rail with an entourage of one hundred plus. Nelson chronicles her visits in an earlier work.

One of the prominent American settling there before the First World War was the colourful James Gordon Bennett Jr. He was a newspaper owner but fell foul of his family and scandalised others in New York when he urinated in the fireplace at a New York reception given by his fiancée’s parents. He fled to a house he built in Beaulieu. He didn’t marry that fiancée but later in life ended many years of bachelordom by wedding Maud Potter, widow of George Julius Reuter, son of the founder of the great news agency, Baron Paul Julius Reuter.

Nelson’s love affair with the Riviera is well documented in his two previous books; Queen Victoria and the Discovery of the Riviera, and Americans and the Making of the Riviera. His new book is a good basis, a primer for further reading.

“The French Riviera”. You would think that the local name “Côte d’Azur” is quite evocative enough for this celebrated stretch of coast. Yet what magic is conjured up by “French Riviera”! And how telling the English words are of its global appeal. Michael Nelson seized on this special characteristic many years ago, and has made the most of it in three books.

Inhabited for 380,000 years, variously by Greeks, Romans and “barbarians”, the Riviera has been cosmopolitan since its very beginnings. So much so, Michael recounts, that even the son of King Edwin of remote Northumbria was sent there to open his mind.

Until the 19th century however, the area was accessible by land only with great difficulty, and if you risked the sea voyage, you might end up rowing the galleys of Barbary pirates. Then first Queen Victoria and later rich Americans opened up the Riviera to the world – not just as a balmy spot to spend raw winters, but as a place of racy pleasures in the summer.

Michael brings its special qualities to life with deep knowledge and an eye for pithy detail.  The French Riviera: a History is told with a relish, not just for its beauties and culture, but also for its seamier sides.

Explore more about the book: